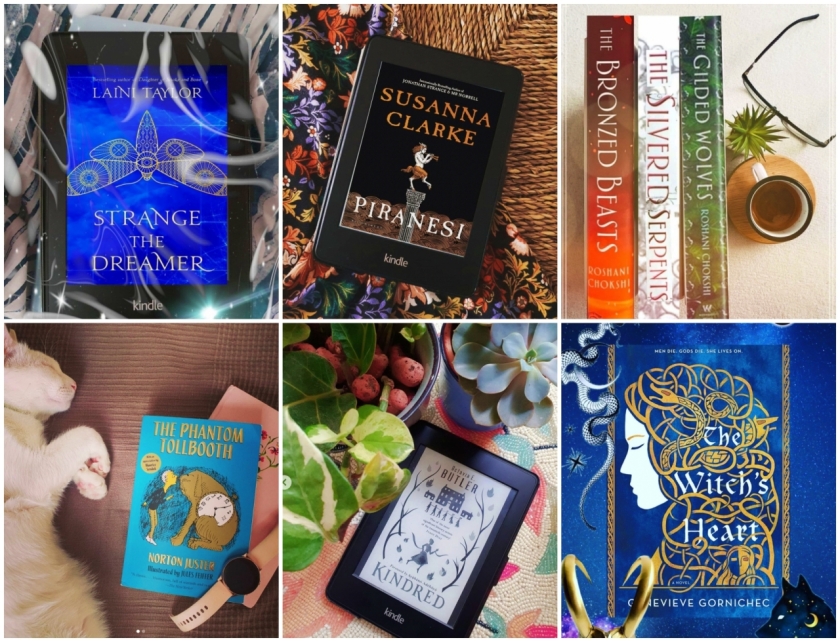 The Lord of the Rings and Harry Potter (I don’t remember which I read first) were the first books that got me hooked onto the fantasy fiction genre. The next was the Discworld series by Terry Pratchett. Since then, it has become one of my favourite genres, and I am so glad to discover a new series with exciting adventures in fantasy lands.

I’m also impressed with so many contemporary authors keeping in mind the diversity of their characters in terms of their ethnicity and sexuality. We need more inclusivity in all aspects in all genres, but limiting your imagination, especially in a fantasy fiction book, doesn’t make sense at all!

Here are the fantasy fiction books I read in 2021

I had seen the UK edition of the first book and fell in love with the cover. Unfortunately, the cover wasn’t released in India, so I just decided to wait for the complete series to be released before reading it (thanks, George and Partick, for me not trusting any author with a series anymore).

It was a beautiful journey through the two books—Strange the Dreamer and Muse of Nightmares, sprinkled with dreamy quotes along the way. There’s a bit of an underdog story, a little love and friendship, and a little family drama, all rolled into one. It is funny and heartbreaking at times, so be ready for some emotional investment while you’re reading this.

“If you’re afraid of your own dreams, you’re welcome here in mine.”

“Once upon a time there was a silence that dreamed of becoming a song, and then I found you, and now everything is music.”

A Court of Thorns and Roses by Sarah J. Maas

The books from this fantasy fiction series have flooded my Instagram for ages, so I finally gave in and tried out the first book. It is a poor representation of the Beauty and the Beast story for adults, with a lot of sex thrown in. I struggled to finish it, cringed throughout, and don’t think I want to pick up book 2.

“I was as unburdened as a piece of dandelion fluff, and he was the wind that stirred me about the world.”

The Hazel Wood by Melissa Albert

This one was another disappointment. It started on a promising note but lost me somewhere in the middle. It pulls you in with a promise of adventure and suspense, then takes you into a dark fairy tale land where nothing is as it seems, and that’s where I lost interest. I powered through to the end, hoping for some interesting twist that never came.

The Phantom Tollbooth by Norton Juster

I heard about this book because I read the news of the author’s passing. It’s a hilarious book full of clever wordplay. The story itself can feel a little dragging, but the hilarity keeps you going, and of course, the funniest books have the most profound and most meaningful messages hidden in their words, so keep an eye out for them. I would recommend it for kids over 10 as they would better appreciate the wordplay.

“But just because you can never reach it, doesn’t mean that it’s not worth looking for.”

The Kite Family by Hon Lai-chu

The fantasy realism genre is not for me. It’s too mind-bending for me to keep track of what’s happening. I found it difficult to continue after a couple of chapters, even after multiple tries. From what I read, there was a lot of depth and meaning behind the story, especially in the context of a  society that values human beings based on how productive they can be.

“A man unable to find work turns himself into a chair so that he will be worth something to society.”

I have mixed feelings about this one. I liked it, but I was also expecting much more from it. You are drawn into this solitary world of dark corridors and routine, with a hint of someone else lurking in the shadows. Slowly, through Piranesi’s internal monologue, we unravel the mystery of the world he is in and how he got there. It’s a well-written book, especially seeing that there’s just one character to follow for more or less the entire book.

“May your Paths be safe, your Floors unbroken and may the House fill your eyes with Beauty.”

The House in the Cerulean Sea by T.J. Klune

I liked the book’s premise—quite like the X-Men house for kids, and the little monsters were adorable. The author admitted that he got the idea of the story from the horrific re-schooling projects for indigenous people of Canada, and wanted to point out how inhumane it is to segregate people, kids especially, just because they look different from what you expect. The book ends happily, of course, unlike reality., which justifiably angered many as trivialising something so devastating for so many. However, I believe the author’s intention came from a good place, and it is a message that needs to be heard.

“Just because you don’t experience prejudice in your everyday life doesn’t stop it from existing for the rest of us.”

A time-travelling thriller that explores race relations, the period of slavery in US history, and how you can be taught to hate. Butler doesn’t shy away from talking about the role of White women in propagating the cruelty, often being worse than the men. It also explores how the same event is experienced differently based on their skin colour. Even though you have a good idea of how the story ended, it’s still a page-turner to know how it got to be. I appreciated that the author didn’t turn it into a sci-fi book on the intricacies of time travel—it just happens for no discernable reason. I felt it when she described how easy it was for someone to get used to slavery on either side of the whip!

“As a kind of castaway myself, I was happy to escape into the fictional world of someone else’s trouble.”

Klara and the Sun by Kazuo Ishiguro

At the way things are going in our current reality, the concept of an Artificial Friend (AF), as described in this book, doesn’t sound way off. People living in isolation or having no time for social interactions because of the pressures of achieving something would hit close to home for many people. Klara, the AF, is as naive as they come and the story is told from her perspective and revolves around her relationship with her human. There were parts where it got repetitive and slow, especially when compared to his earlier works with a similar theme, but it was a decent read.

“They fought as though the most important thing was to damage each other as much as possible.”

Son of the Storm by Suyi Davies Okungbowa

For once, I broke my rule of not starting a series before all the books were published. In my defence, though, I thought it would be a one-off book when I started it. It is a fantasy world set someplace in the African continent and reminiscent of Wakanda. We follow Danso as he discovers more about himself and the world as he knows it as he is forced to go beyond the city walls. Lots of characters and twists in the tale make it an exciting read. I am hoping for the next instalment to be released this year.

“You say you want liberty, but you can never be free alone. None of us are free until all of us are.”

The Witch’s Heart by Genevieve Gornichec

I loved this book. It is a complete re-imagined point of view of the myth of Ragnorok from the perspective of one of Loki’s wives that is never talked about except in the context of her children. I love how the author takes us inside a woman’s head and heart, explaining her actions and why she fell in love with the God of Mischief and how she dealt with everything that came after. Not just a wife and mother, but we see Angraboda as a woman trying her best to live in a society with strict rules on what a woman should be.

“The ending doesn’t matter. What matters is how we get there. To face what’s ahead with as much dignity as we can muster and make the most of the time we have left.”

The Gilded Wolves, The Silvered Serpents, and The Bronzed Beasts are the three books in the series. You can read my full review of these books in my previous post. It is a series that mixes fantasy and history in a way that had me hooked right from the first page. It is set in Paris during the late 19th century, which in itself evokes a kind of romance that’s hard to parallel. It follows the story of a group of pariahs led by Séverin Montagnet-Alarie as they get thrown into a world of magic, myth, and political conspiracy.

“History is a myth shaped by the tongues of conquerors.”

“But a shared past didn’t make a future.”

“I don’t think you’re lost. You’re just searching for the thing that fills you with light.”

Note: Some links are part of an affiliate program, which means that if you click on a link and buy something, I might receive a percentage of the sale, at no extra cost to you.