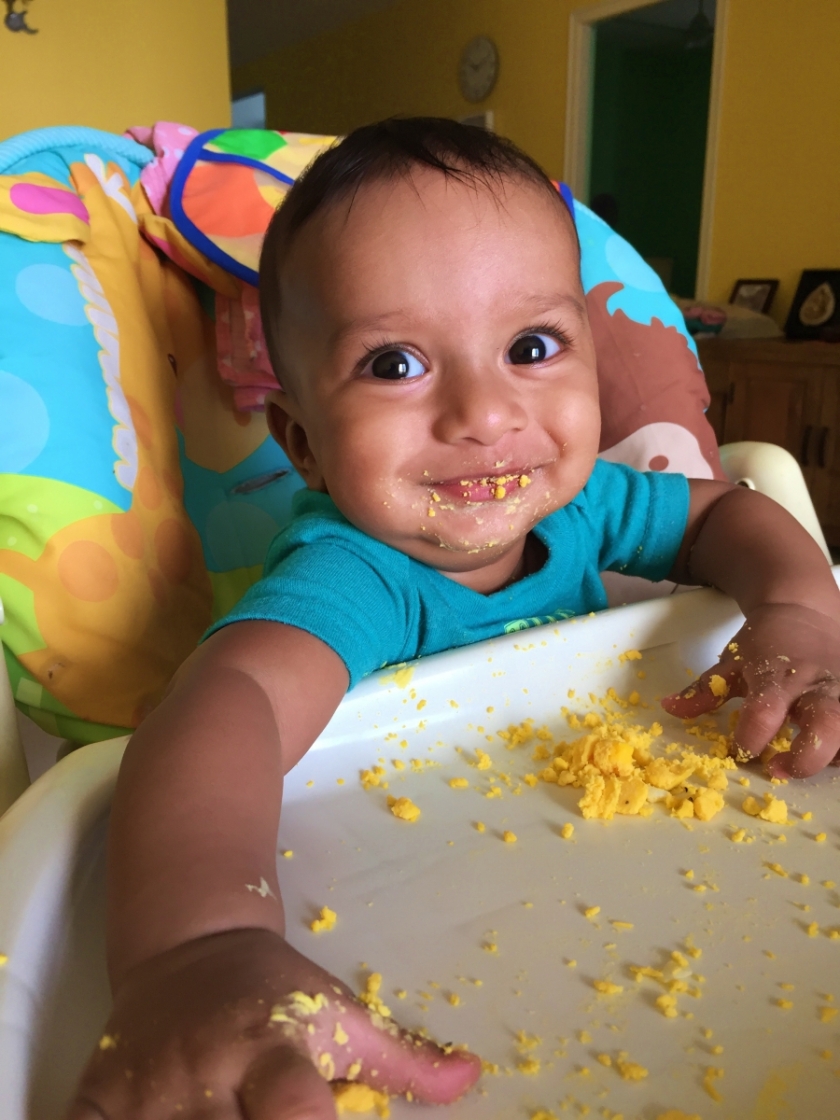 Teaching good eating habits is a skill that’s important to learn. If you’re a parent, grandparent, or caregiver, you’ll want to encourage your baby to try different foods as soon as possible. Not only will this build their appetite for mealtime, but it’ll help them identify new tastes and textures as young children.

Wherever I’ve lived in India, I’ve always seen babies being chased by their caregivers with a piece of food to stuff down their mouths. Homes, playgrounds, and even in restaurants. Whether it’s the twentieth bite of rice and dal, or a cookie (which makes me think if you’re going to force-feeding your child why not just make it a healthier fare?), there’s a child running away from it.

I was sure I never wanted to do that. There had to be a better way. My research saved us all.

What is baby-led weaning?

Baby Led Weaning is a gentle but effective approach to teaching your baby to eat well.

Baby led weaning basically means you follow your baby’s cues while introducing solids. No giving mashed up purees, but rather whole, solid foods.

Baby led weaning (also known as baby-led weaning or BLW) is a way of introducing solid foods to babies, in which the parent feeds the child by hand using finger foods instead of an infant spoon or other types of cutlery.

This doesn’t mean the end of breastfeeding or formula feeding. Introducing solid foods is just a transition phase that supplements the nutrition from the milk as the baby is growing.

The question of when to start baby led weaning has different answers depending on who you ask. The safest consensus is around the age of six months, give or take a week or two. Your baby will show signs of interest by wanting to grab what you’re eating.

Many people expressed concerns about why we were waiting for so long to introduce solids to our baby. He needs more nutrition, they said. Some even insisted we should give him some water. Please do not listen to anyone and do your own research.

Babies’ digestive systems are not mature enough to handle solid foods before they’re six months old. And for the love of all things holy, no dairy milk. Please. They cannot digest it.

Also, since they have tiny tummies, do not give anything apart from mother’s milk or formula before the age of six months. Otherwise they don’t have space for the healthy stuff. And guess who they’ll blame for a ‘weak’ baby?

Some great options for baby led weaning foods are bananas, boiled carrots, cucumbers, melons, boiled beetroots, and even rice. In India, people will suggest the water from cooked lentils. Just give regular boiled lentils (dal), without the tempered spices. Full of nutrition.

There are a lot of great ideas out there on how to get your child to eat a variety of foods when it comes to baby led weaning but for me the number one rule is no junk food and no sweets.

Now here comes the most important steps that’ll make your parents and everyone’s grandmothers gasp – let the baby feed themselves. Just put the food in front of them. They will explore the texture, taste, squishiness, and also make a good mess in the process. Let them.

If you’re concerned about cleaning up then just let them sit in their diapers (so whatever comes out doesn’t get mixed with the food) on a mat that can be cleaned. We would put a large plastic sheet under his high chair. Sometimes, our dog would help with the clean up.

When our son was about eight months old, we gave him small spoons to eat things like lentils and porridge. He slowly learned how to get food to stay on it long enough to reach his mouth.

You can look up more baby led weaning foods by age. Start with single ingredients then graduate to regular food that you’d eat at home, minus some of the stronger spices.

Baby led weaning benefits the baby and you. The baby takes their time in learning about the food item and how to eat it. They are in control at all times, which they love. They know what they like and how much of it they want. This leads to a healthy relationship with food as they grow older. Avoid distraction feeding as well. No TVs or other distractions while eating. Focus on the food.

The benefit for care-givers is that they don’t need to be running around trying to force-feed their babies (which is a kind of cruelty that is not seen as cruelty because it’s so common).

As for nutrition, for the first year of a baby’s life, their primary source of nutrition is their mother’s milk or formula. Solid foods are just a supplement and a transition. So don’t worry if they’re not having a full bowl of rice.

Trust your baby’s instincts. Whenever we’ve forced our son to finish his food even though he’s made it clear he doesn’t want to, we’ve regretted it. He’s thrown up, or had an upset stomach.

There will be times (every day) when it will seem much simpler to just feed the baby yourself and get done with it. I’ve done it on difficult days. But if you persist with this method, you’ll thank yourself as your child grows more willful.